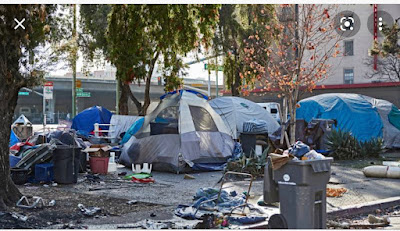 Progressive policies by focusing on caring without accountability and by victimizing groups are destroying our cities and aiming further to destroy our country.

Progressive policies have led to many people believing that they deserve rights without any responsibilities.  Illustrations of unchecked compassion include San Francisco streets dotted with homeless encampments, over-compensating workers for not working resulting in severe labor shortages, open borders that allow migrants to stream into our country unvented, without requirements.

Democratic politicians use compassionate rhetoric much more often than their Republicans do.  Republicans are portrayed of as “not caring.”.  This despite of evidence of the opposite. Studies reveal that Republican give more to charity.  Using voting and IRS data for the residents of 3,000 counties across the nation, a four-professor research team found, according to the according to the New York Times that counties which are “overwhelmingly Republican” report higher charitable contributions than Democratic-dominated counties.  Arthur C. Brooks, the president of the American Enterprise Institute, published "Who Really Cares: The Surprising Truth About Compassionate Conservatism." Brooks made a data-driven case that, even after accounting for income differences, conservatives give 30 percent more to charity than liberals do, and that residents of red states volunteer more than those of blue states do.

Caring about people is a good thing.   Republicans fail to proclaim their own sense of caring enough.  They do care that all people should be free and afforded the opportunity to pursue their dreams.  They do care that people are given help in times of personal, local or national disasters.  But free stuff without accountability is reckless and dangerous to our civilization. Movements such as “Defund the Police” and “Black Lives Matter” are  examples  of efforts of caring without accountability. It becomes ok to loot, steal and destroy in the name of vigilante justice.

Change has to come. Change towards freedom and caring with responsibility.